﻿﻿﻿﻿﻿
﻿
Gargoyles (in the strict sense) are carvings on the outside of buildings originally designed to direct water from the roof away from the base of the walls.
Some gargoyles are undecorated but many are elaborate creatures - often very imaginative and/or grotesque. When drainage was introduced, the gargoyle stayed for decoration purposes. This led to the term 'gargoyle' being applied more widely to any grotesque carving in medieval buildings.


Gargoyles are thought to fight off evil and offer protection for your house and garden. They can stand guard and ward off unwanted spirits and other creatures. If they're hideous and frightening they can scare off all sorts of things. They are supposed to come to life and protect the surrounding areas around a dwelling while everyone is asleep, keeping it safe and secure.

﻿﻿If you have a large home and you want a gargoyle for protection, make sure it has wings to fly as it is believed that winged gargoyles will fly around the whole area, circling the home, watching and turning away evil. They return to their places when the sun comes up (and no-one can prove that they weren't out and about, and no-one respectable who rises and sets with the sun is going to be mistaken by them for an enemy and be dealt with). 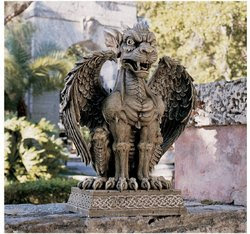 So what about the rather tame looking ones? It is believed that some of the slightly grotesque gargoyles may depict concepts that were much simpler for people in medieval times. For example, pulling your lips wide apart in a grimace using your hands and trying to look scary ("gurning") was a terrific joke. Presumably it was also more scary than now, given that any kind of deformity could be worryingly reminiscent of deformity from incurable diseases or unexplained acts of God or devil, both things to be feared in medieval times. 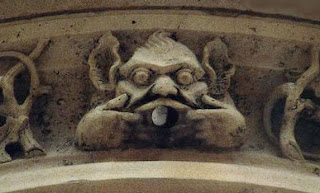 Gargoyles are generally made from stone and are a symbolic protection for the home. People say if you stare at them for long enough, the gargoyle will appear to move. The gargoyle sits best at the front of your home where it can keep a watchful eye.

Each day as you walk past your gargoyle, thank it for protecting your home. 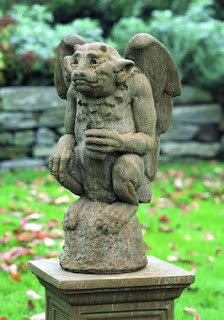 Take the Hard Work out of Yard Work!